We knew we booked the right girlfriend getaway the moment we pulled into the driveway of the Rowland House in Aurora, New York. At 10,000 square feet and 10 rooms, the Queen Anne style home was both impressive and welcoming. Lake Cayuga shone in the background, and 120-year-old ginkgo trees crowned the lawn, their leaves the color of spun gold in the fall.

My friend Barbara and I had the feeling that we had entered an enchanting picture book setting. Aurora, with a year-round population of fewer than 300 residents, is listed on the National Register of Historic Places. During walks through the village we admired the magnificent houses from the 19th century. We later learned the remarkable story of the village’s picture-perfect beauty.

We chose the Finger Lakes for our water, winery, forest, and hiking vacation, basing ourselves on the shores of Cayuga Lake. Rowland House, one of Aurora’s five inns, fulfilled our desire for a small property with great service. A sister inn housed a restaurant and a spa was within a five minute drive. Vineyards, hiking trails and waterfalls criss-cross the region. Though we didn’t book early enough to get a massage, we walked past the spa’s cattail-ringed pond and along soybean fields fringed with white, yellow, and purple wildflowers that are part of Aurora’s sprawling landscape.

Another draw was Cayuga Lake, the longest of the Finger Lakes at over 38 miles. We learned about the fabled residents of Aurora on a blustery boat ride with Capt. Matt Bianconi, whose family has lived here for generations. Local entrepreneurs Edwin Barber Morgan and his brother Henry became wealthy by shipping agricultural and other produce across Cayuga Lake to the nearby Erie Canal, which opened in 1825. From the 363-mile waterway that stretched from Buffalo to New York, boats reached the Great Lakes and traveled down the Hudson River to New York City. Trade boomed.

In 1832 the Morgans met and became friends with Henry Wells, who later moved to Aurora. He became president of the Cayuga Lake Railroad and commissioned the lake’s first passenger steamers. To accommodate traders, EB Morgan opened the Aurora House in 1833, which later became the Aurora Inn. The Aurora Inn and Morgan’s magnificent 1858 Italianate Mansion are two of the Inns of Aurora’s properties. Morgan was also an original investor in The New York Times.

Wells founded American Express and co-founded Wells Fargo to enable merchants to safely transport gold and cash between California and the East Coast. He also founded Wells Seminary in 1868, renamed Wells College in 1870, with EB Morgan and other benefactors to educate women. The seniors still ride the stagecoach across town to celebrate.

As a student in Wells, Pleasant Rowland fell in love with Aurora. She created the American Girl series of books and dolls and later sold them to Mattel for $700 million. As of 2001, she invested more than $150 million in the village, burying power lines, opening inns and a market, and devoting the same attention to detail to the village’s regeneration that fueled the success of American Girl.

The drive past rolling fields and wineries to restaurants and sights was a treat for the eye. We ate excellent duck and crab cakes on the outdoor patio at Elderberry Pond Restaurant, a local gem that serves organic fruit and vegetables while listening to the breeze rustle the leaves of the maple trees. In autumn they turn a gorgeous burnt orange.

More than 100 wineries have taken root in the Finger Lakes. Of the 14 Cayuga Lake dotted, we toured two up the road in Union Springs. On the hillside of Quarry Ridge, we enjoyed a dry rose and a view of the lake from the winery’s covered porch. Next door, Heart & Hands Wine Co. has a small indoor tasting room and table in a garden where we sampled rich pinot noir, riesling and chardonnay while learning about the wines and the microclimate of the lake, which the vineyards enjoy in winter keeps alive.

Drawn by the chance of seeing the tallest free-falling waterfall in the Northeast, we hiked the gorge trail at Taughannock Falls State Park in Ulysses, about 50 miles from Aurora. As promised, the waterfall tumbled 215 feet down a sheer cliff face. However, the recent drought reduced the cascade to a disappointing, hard-to-see trickle. Still, we enjoyed walking among the 400ft cliffs.

Each afternoon we came back to sit on Adirondack chairs on the lakefront, enjoy complimentary wine and cheese, and take in the waterfront views. Since most of the shoreline is privately owned, the lake feels pristine. Instead of crowds and numerous ships, we only heard a few boats. We appreciated the soothing lake views and tranquility.

Rowland House is part of the five Inns of Aurora: www.innsofaurora.com.

The Rowland House in Aurora, New York was founded by Pleasant Rowland, who also made American Girl dolls and books. Photo courtesy of Inns of Aurora.

Some rooms at the Rowland House in Aurora, New York overlook Cayuga Lake. Photo courtesy of Inns of Aurora. 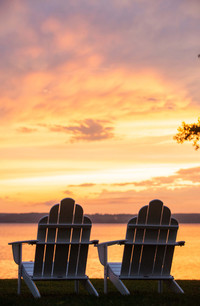 and discover www.HennysKids.org, her non-profit organization bringing solar-powered computers and education to rural schools in Africa. To read contributions from other Creators Syndicate writers and cartoonists, visit the Creators Syndicate website at www.creators.com.