JUNEAU, Alaska (KINY) — Saturday afternoon marked the return of the Authors’ Meeting with authors from across the Southeast coming together to discuss their work in education, including Alaska Awardee of the Year Heather Lende.

Catherine Schleck spoke about a meeting with authors that took place in the library at JDHS on Saturday afternoon.

“We have an author meeting with local authors. Most are from Juneau. We have two others, one from Haines and one from Gustavus. I just moved here about two months ago. I’m a district literacy and justice specialist, just like Sheila Keller. She also helped me plan this event. She’s a long-time staffer for the Juneau School District, so she had a lot of local knowledge to bring these writers on board. We’ve also worked with Hearthside Books. I liked socializing. One of the writers is with the US Coast Guard and my husband is with the US Coast Guard so we moved here. It’s nice to make new connections and nurture our local writers.”

She noted that the author’s meet and greet has been limited in recent years.

“It is my understanding that this conference is held somewhere in the state of Alaska every year and it is actually the first time it has been held in three years since COVID. So it used to be the Alaska Cross-Curricular Conference. And now you’ve changed it with a stronger STEAM subclass. So these are science, technology, engineering, arts and math. So we invited the writers here to the Alaska STEAM conference and this event is sponsored by ASLA the Alaska State Literacy Association. They wanted to be present here at the STEAM conference and we were trying to focus on writers and illustrators or any kind of writers, anyone who is some sort of naturalist. Educators at the conference could come in and talk to writers, maybe learn how to use their work or apply strategies they use during the writing or creative process in their classrooms.”

Heather Lende, the Alaska State Writer Laureate, spoke about her award and her writing.

“I’m from Haines and I’m the current Alaska State Writer Laureate. I’m here for the STEAM conference because of my books, some of which are being used in high school classes here in the Southeast and across the state.”

Lende commented on how it felt to receive the award for her entire work.

“It was surprising and wonderful. And I really do feel like I’m here, just representing Alaska’s diverse, inspirational writing community. Many Alaskan authors and books that translate to education. And I also think having stories about the place you live and familiar things is very important for young people growing up in a place as unique as Alaska.”

Lende said what inspired her to start writing.

“Because of the place, I started writing again. I lived in Haines almost 40 years ago as a young mother and I started volunteering at the radio station. And then I started working at the radio station. I learned how to write radio and how to speak for radio. And that same voice has carried me through columns and essays and books. It’s intimate, one and one, and I thought if I had the guts to speak into a mic I could put some words on paper.”

The mentioned radio station Lende is KHNS Radio in Haines.

Lende has combined her four books.

“The first is called ‘If You Lived Here, I Know Your Name,’ which was about coming from the east coast, making a home in Haines and working with the local paper to write obituaries. The second is ‘Take Good’ Tending the Garden and the Dogs’ and this book followed ‘If You Lived Here’. I was in a bad accident and got run over by a truck. Because of my church and my family and my faith, I got better in many ways. I have written about 400 obituaries for the Chilkat Valley News over the years, the most recent being Of Bears and Ballots, An Adventure in Small-Town Politics.’ I was a member of the Haines Borough Assembly from 2016 to 2019.”

Lende concluded with a message to the students.

“I observed what I saw, what I heard, what I lived and wrote it down. This is good news for children. If I can, they can.” 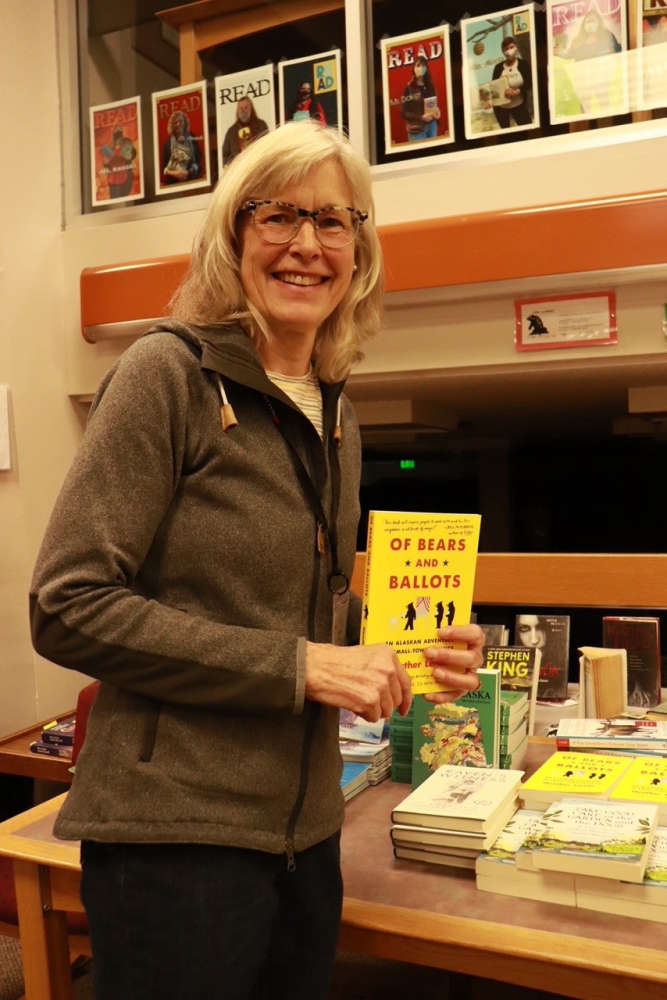 Above: Heather Lende with her latest book, Of Bears and Ballots. Below: Sarah Asper-Smith holds her new book, I Would Teach You to Fly. 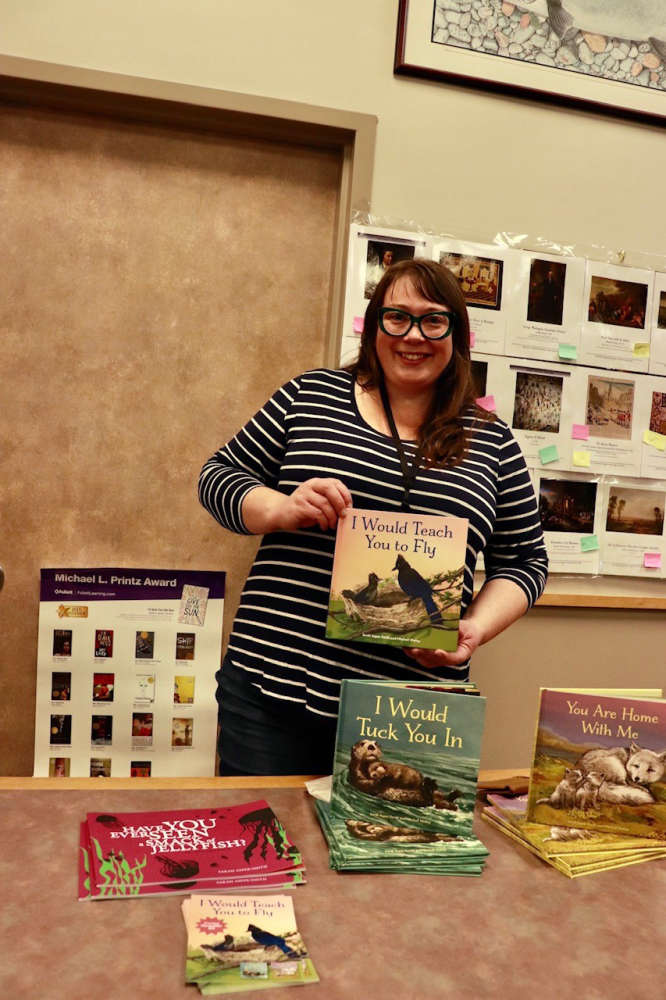 Another author, Sarah Asper-Smith, spoke about her children’s book trilogy and gave an update on her latest book.

“My new book is called ‘I Would Teach You to Fly’. It was illustrated by my husband, Mitchell Watley, and written by me, Sarah Asper-Smith. It’s the third and I’m marking the end of the ‘I’d Tuck You In’ series that began with ‘I would Tuck You In’. The trilogy started 10 years ago and it’s a lovely book to read to your little ones with some extra animal facts to keep parents bored less too.”

Asper-Smith said the public can find her books during the first Friday of December, Juneau’s annual Gallery Walk.

“You can find the books at most bookstores in town, but especially at Alaska Robotics downtown on Front Street. They’ll have a first Friday for us in December and we’ll sell all the books, prints to the end Mitch, and I bet there’ll be good snacks. Also my book ‘Have You Ever Seen Touch of Jellyfish?’ is sold exclusively at Alaska Robotics.” 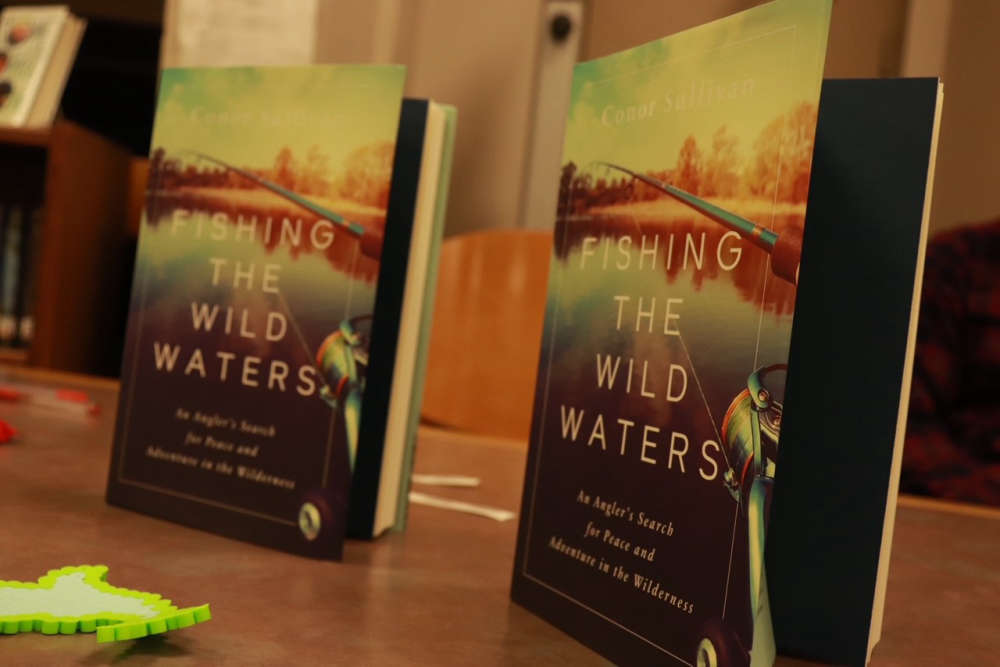 Above and below: Conor Sullivan said his book Fishing The Wild Waters describes his experiences as a fisherman over four years fishing Hawaii, Alaska and New England and connecting nature through diverse cultures. Below: Jim Fowler and Susi Gregg-Fowler have published 8 books together. Here they are with their book ‘Who Lives near a Glacier?’ and many first draft illustrations. 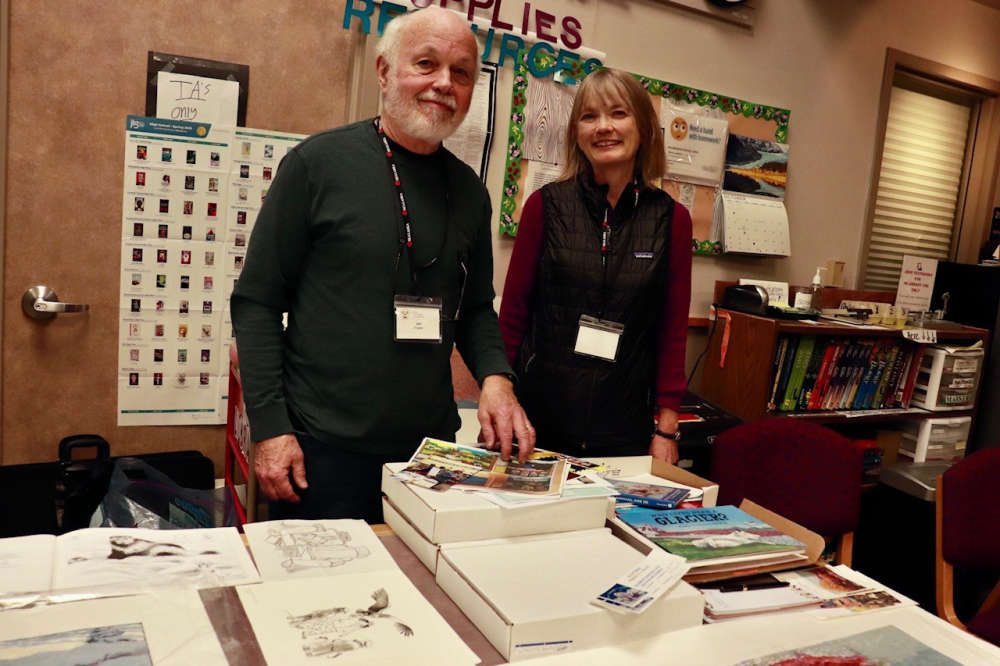 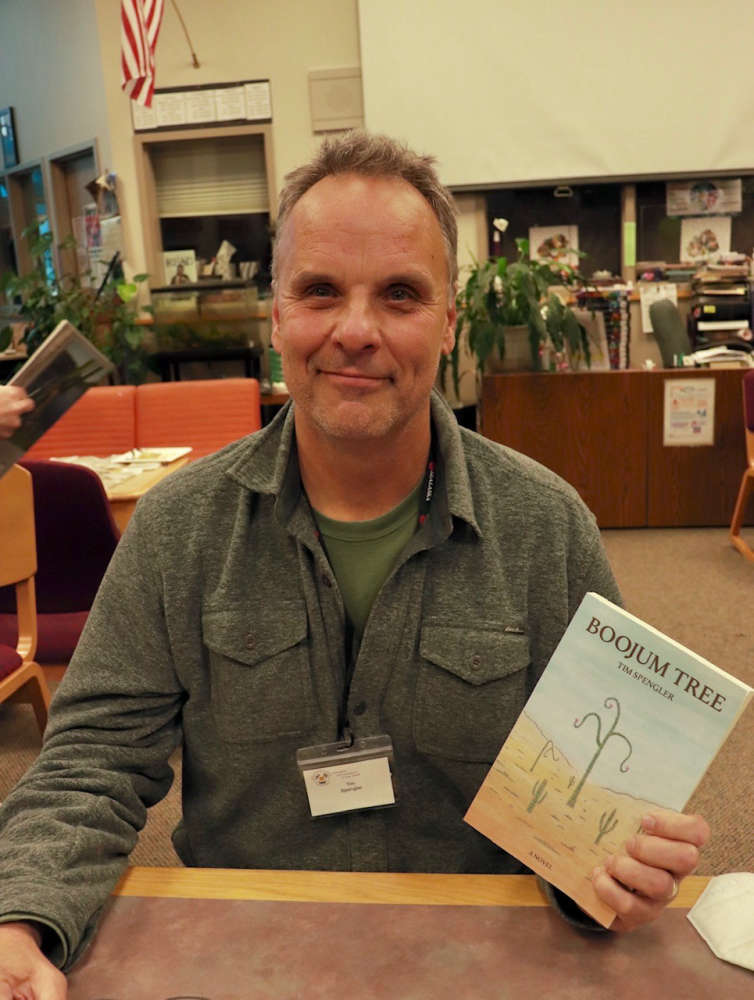 Above: Tim Spengler recently self-published his book Boojum Tree. Spengler lives in Juneau, but his book is set in California, where he lived. Below: Luna’s Big Oxcident is a children’s book about a real muskox who recovers from an injury on Palmer’s muskox farm, written by PT Custard and illustrated by Amanda Rose Warren. Custard said Luna is now 20 years old and is still thriving. 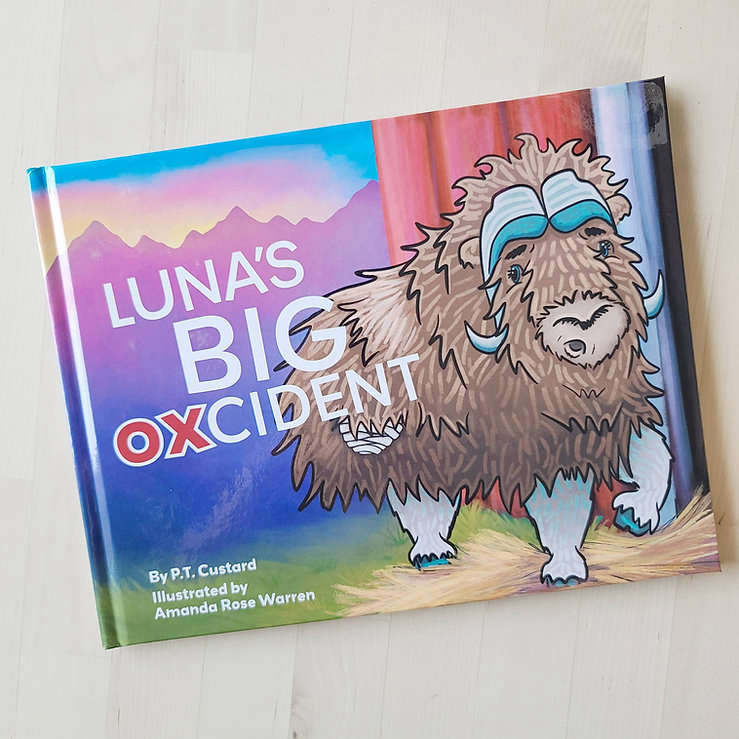